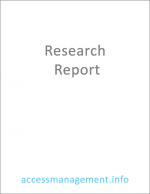 This state-specific study on the economic effects of access management was conducted for the North Carolina Department of Transportation (NCDOT) in response to business owner opposition to access management in North Carolina and their perception it would negatively impact profits. This study included 16 total sites and surveyed 789 businesses. The poor economic climate at the time was taken into consideration, and comparison control sites were included in the study. Overall, the research team found no significant difference in revenue between comparison sites and treatment sites. Access management treatments, particularly the installation of medians, did not affect businesses as much as initially perceived. Business owners at treatment corridors ranked accessibility relatively low when ranking considerations that customers use when choosing to do business at a location (64% of respondents ranked accessibility a 4,5, or 6 out of 6 possible considerations a consumer might use to when choosing a business at a particular location). The general perception of medians among business owners was much more favorable after project completion.