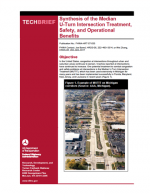 In the United States, congestion at intersections throughout urban and suburban areas continues to worsen. Crashes reported at intersections have continued to increase. One potential treatment to combat congestion and safety problems at intersections is the Median U-Turn Intersection Treatment (MUTIT), which has been used extensively in Michigan for many years and has been implemented successfully in Florida, Maryland, New Jersey, and Louisiana in recent years

Based on the literature review conducted, the following summarizes the major conclusions: