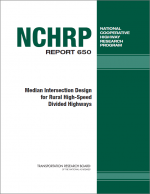 This report presents recommended improvements for the geometric design and safety performance of at-grade intersections on expressways.  In general, the operational and safety performance of these multi-lane divided highways nearly matches those of rural interstates.  However, because expressways allow for stop-controlled at-grade crossings, increases in both major and minor roadway traffic volume have had a significant impact on intersection safety in recent years.  The study investigated alternate safety improvements and indentified their relative effectiveness and focused on reducing the number of conflict points, improving intersection sight distance, and providing advanced warnings to drivers on both minor and major approaches.

By replacing traditional two-way stop-controlled intersections with J-turns, jug handles, or offset-T intersections, the number and severity of conflict points can be reduced.  Intersection safety performance can also be improved by using median acceleration lanes or offset turning lanes to aid in gap selection.  Driver awareness of potential conflicts can be improved using static or dynamic advanced warning signs on both the major and minor approaches. The report includes information on acceleration lanes and such information is minimal in the broader body of literature.