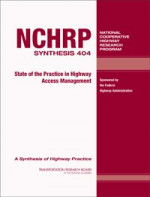 NCHRP Synthesis 404: State of the Practice in Highway Access Management

This is the most recent study of the national state of the practice in access management. In particular, Chapter Two notes that 58% of the 50 State DOTS now indicate they have statutory authority or administrative rules related to access management.

Chapter Three synthesizes findings of NCHRP Report 524 regarding the safety and operation effects of U-Turns at unsignalized median openings (pp 21-22), including guidelines for their use location and design that are being adapted for NCHRP 03-99. It also includes details from NCHRP Synthesis 332 on factors used to set access management criteria at interchange areas, lessons learned concerning planning operation and design of new and retrofit interchanges, and a discussion of the issues and literature surrounding AASHTO A Policy on Design Standards – Interstate System relative to managing interchange area access. This data will be useful for the new Interchange chapter of the AMM2. Chapter Six includes profiles of contemporary practice that should be partially integrated in the appropriate sections of the AMM2 (e.g. permitting, state program development, access classification).

Among the many examples of interest to the AMM2 are North Carolina, which developed an access management system that divided their roadways into four “facility types” of freeways, expressways, boulevards and thoroughfares, to be treated in a strategic highways corridor initiative. The definitions of the classes considered the roadway function, based on level of mobility (movement), level of access, presence of traffic signals, driveways density and existence of medians. Indiana employed an access management system that treated the four separate categories of Interstate and Freeways, Tier 1: Statewide Mobility Corridors; Tier 2: Regional Corridors; and Tier 3: Sub-Regional Corridors. They further stratified the tiers into “A” and “B” sets, for multilane highways and two-lane highways, respectively. Deviations were allowed within the standards for urban and rural locations.