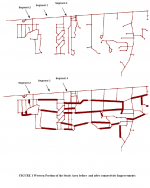 Relationship between land use patterns and highway widening

Alba, C. and E. Beimborn. Relationship between land use patterns and highway widening, Center for Urban Transportation Studies, University of Wisconsin (2004). [Alba, C. and E. Beimborn. Analysis of the Effects of Local Street Connectivity on Arterial Traffic, Proceedings of the 84th Annual Meeting of the Transportation Research Board, January 2005.]

This study (and the corresponding TRB paper) examines the effect of local street connectivity on arterial traffic volumes. The analysis compared traffic volume on an arterial roadway in Tallahassee, Florida before and after improvements to local residential street connectivity. Reduced arterial traffic is expected in areas with a mix of land uses, high activity levels, and high connectivity. The study area included low levels of connectivity, but high levels of activity (number of households, retail and non-retail land use). Geometry of the arterial was constant in both the before and after conditions, with no additional access points. Figure 9 illustrates the western portion of the study area, which was the focus of the TRB paper.

Figure 9. Western portion of study area before and after connectivity improvements.

Using HCM 2000, the team determined that a conservative estimate of the demand volume for the full peak hour that would serve as a road widening threshold (between LOS D and E)  for a two lane highway (common arterial type in Tallahassee) would be 1500 v/h. This was reconfirmed following a sensitivity analysis of variables relative to the case study roadway.  Of interest to the AMM2 are the following findings:

Access Point Density has a considerable impact on the threshold estimation when the total number of access points per mile on both sides of the roadway is equal to or greater than 30. Figure 3.6 (reproduced below) shows that whenever the number of access points is 40 ( an average of 264 ft), the traffic volume required to reach the widening threshold drops down to 1044 v/h

Access Points per mile is one of the most influential factors for the traffic volume selection but for a number of 10 to 20 points per mile, which could be considered as a typical range, the traffic volume remains at 1514 veh/h. Access points are considered to be points that contribute to changes in travel speed. Intersections, driveways, or median openings on the opposite side that are expected to have a significant effect on traffic flow in the direction of interest may be included when determining access-point density. The percentage of no-passing zones was also considered as influential but, for typical conditions, for example 20% no-passing zones, the traffic volume needed is equal to 1514 veh/h.

Figure 10. Implications of access density on roadway level of service.